Did LICs just dodge a political risk bullet? Or is the sector set for a shake-up? 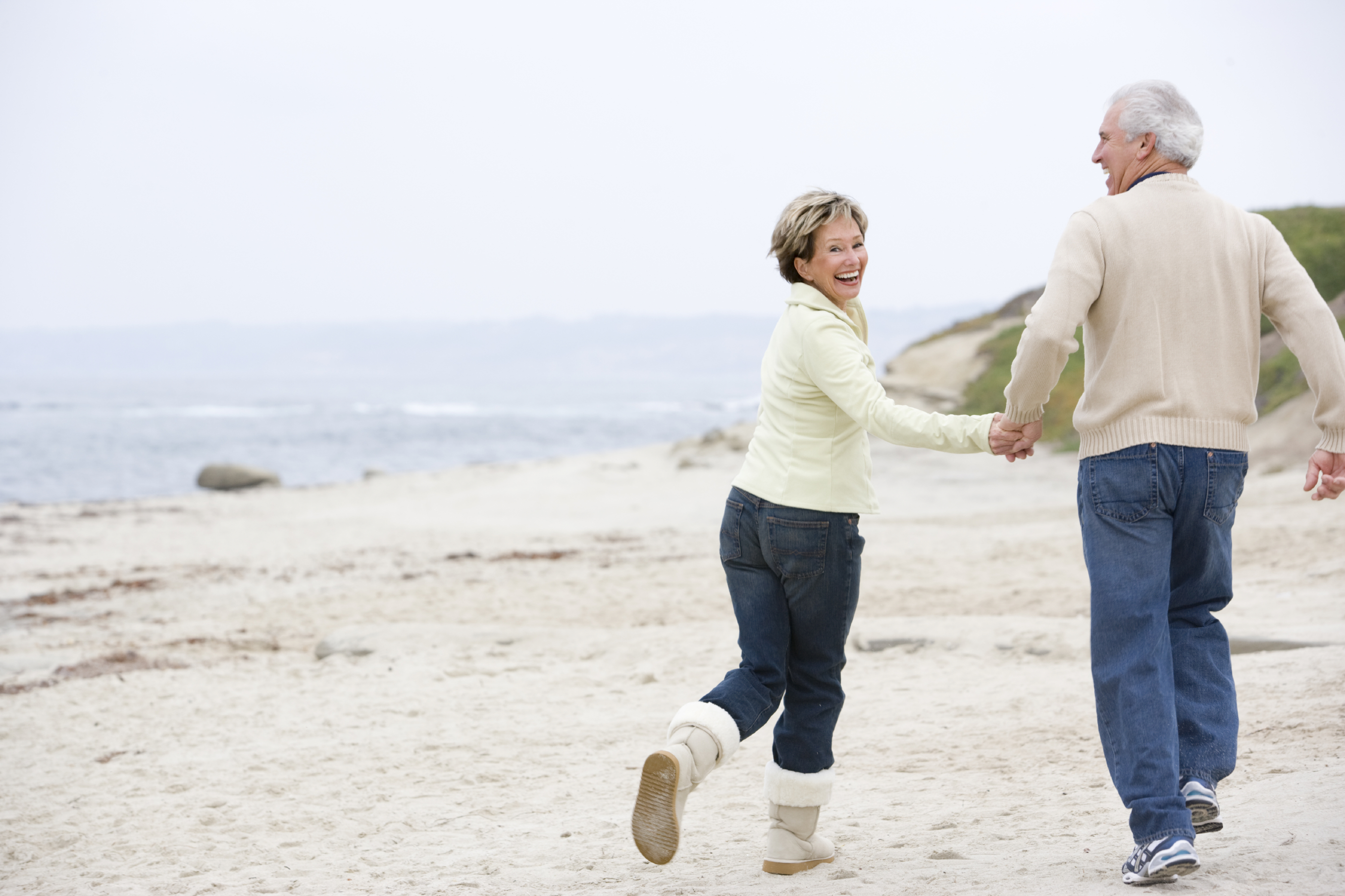 With the election complete, retirees all around the country have claimed victory in opposing Labor’s ‘retiree tax’ in the form of the proposed winding back of taxation legislation regarding franking credits. Zenith suspects that this may come as cold comfort to any who have already repositioned their portfolios in an attempt to front run the proposed changes on the basis that as little as 24 hours before the election, Labor’s win looked highly likely.

During the course of the election, many questions were raised, including:

Looking at LIC trading as an indicator, market sentiment experienced a decline post Labor’s announcement on 13 March 2018, that if elected they would seek to reform the dividend imputation credit system. When measured by their prevailing premium or discount to NTA, it is apparent that the LIC market materially de-rated following the initial announcement as investor uncertainty took hold.

Obviously, Labor’s announcement has not been the only aspect at play, as we note that the market had already been de-rating some LICs trading at very high premiums (those trading at 20%+) and both market and individual performance also needs to be considered. However, the accelerated re-rate of the sector post the election result seems suggestive that political sensitivity has been a factor, particularly given Australian equity LICs had the largest premiums prior to Labor’s announcement.

The following chart highlights this change by comparing each LICs prevailing premium or discount to NTA as at 13 March 2018 (when Labor’s policy was announced), compared to 30 April 2019. [Note: we have elected not to label each vehicle as this is less about the individuals and more about the broader trend]. 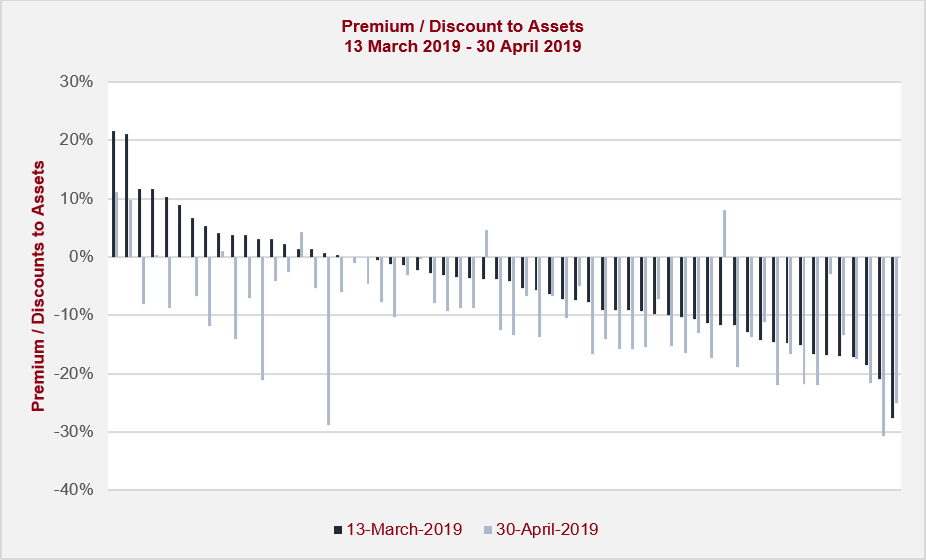 With Labor losing to the Coalition, these fears now seem moot (and we would reasonable expect some level of positive re-rating for some of the LICs/LITs above on the back of this result). However, this raises other interesting questions. In the run up to the election, many commentators took the view that Labor’s proposal would ultimately be positive in addressing retirees strong home bias, as it meant people would effectively be encouraged to diversify away from portfolios traditionally heavy in equities as a source of yield.

But, with investors having just passed through a politically driven near-death experience, how might the search for yield change? Will LICs investing in Australian equities remain attractive as an investment tool?

Zenith believes there are two essential elements to consider: the return characteristics of asset classes and the structural differences of utilising a company versus a trust.

Prior to the election, there was a single question uppermost in the minds of those who stood to lose franking credits (i.e. 0% tax payers). Where do I replace the income from franking benefits for Australian shares which would be lost?

The realistic answer for these investors, albeit an unpalatable one, is that this is not easily done without making major compromises to asset allocation. [Note that for the purposes of this report, we are not considering other structural avenues such as changing to industry funds]

Australian equities have traditionally been a high yield market. While this has been driven in part by taxation perspective, Australians have long expected to derive income from equities. However, even when removing the impact of franking credits from the equation, Australian equities are still one of the highest yielding assets classes which are available in a liquid, diversified format.

While listed property in the form of Australian REITs runs a very close second when taking tax implications out of the equation, a wholesale shift into REITs from a portfolio diversification perspective is unlikely to be conducive to adequate risk management.

While pursuing other assets classes outside Australian equities can obviously be considered, such a reallocation presents its own set of risks. These exposures to other assets, either directly or indirectly via managed funds, would have neatly sidestepped the franking issue. However, other investment risks would then come into play.

Based on Zenith’s long-term market assumptions undertaken by our portfolio consulting team, the long term expected returns versus their historical risk levels is shown in the chart below for the major liquid asset classes. 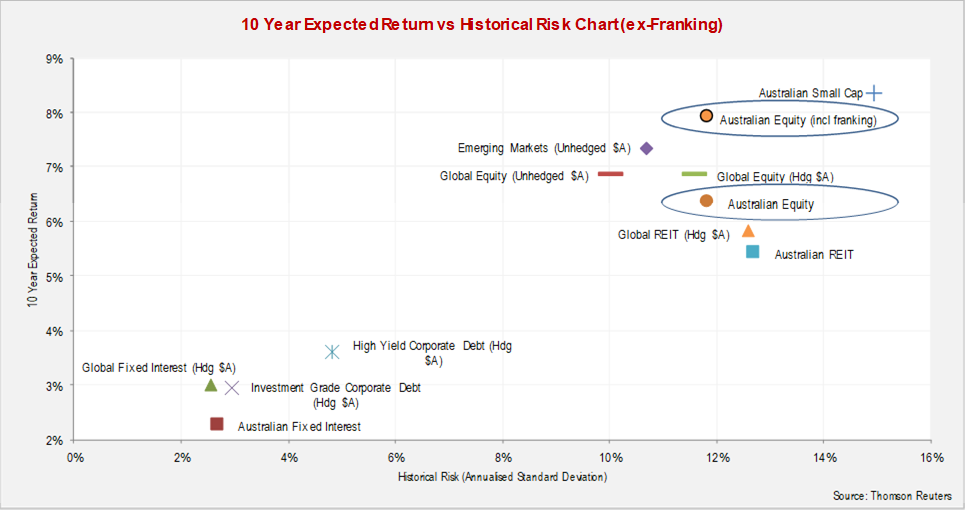 From a portfolio construction perspective, clearly, lowering the returns available from Australian equities by removing franking would have generally reduced their allocation in portfolios from an optimisation perspective (the impact of lower returns for the same risk). While feasible, this has two glaring outcomes. Firstly, substituting other assets classes simply introduces other risks and secondly, it still fails to address the question of replacing income for current retirees.

Investors could also have elected to pursue a range of other income producing securities. Some private markets such as real estate, infrastructure and credit, can also deliver stable yields at attractive levels. However, the question needs to be asked, is that the right thing from an asset allocation point of view for that investor? The right balance and structuring of assets is essential.

Ultimately, Australian equities still hold a key position across the asset classes from a yield perspective. For LIC’s, it would be reasonable to expect that this will continue to be the case for the foreseeable future. So, the next logical question is, does the structure of listed vehicles have a bearing on income generation?

LICs or LITs? Which works best?

The rise of trust structures through LITs has been a relatively recent phenomenon. While they have been brought increasingly into focus as the arguments around franking mounted, they have maintained a presence on the ASX for many years, albeit at a very low level until recently. With the rise of fixed income as an asset class, the question of LICs versus LITs has been thrown into sharper focus.

The chart below shows the capital raised between LICs and LITs since 2010. 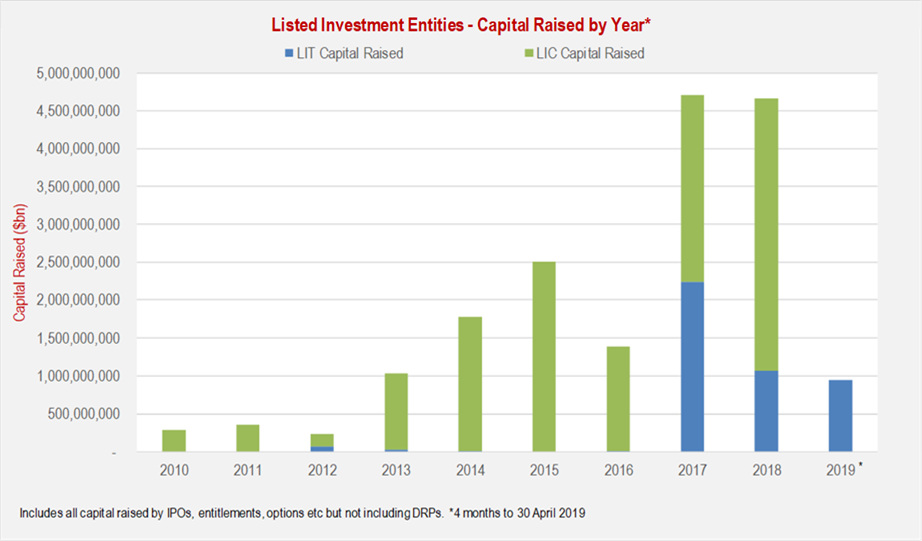 The key difference between the two structures is the way income and capital gains are treated.

For LICs, under the company structure, dividends and capital gains are treated as income, contributing to the profit and loss position. The company pays tax on earnings and pays dividends (franked or unfranked). One of the advantages of the company structure is that a company can elect whether to pay dividends and can also smooth cashflows from retained earnings from one year to the next, thereby potentially decreasing the volatility of the income stream to investors. This has traditionally been a highly attractive feature of LICs when dealing with an inherently volatile asset class like equities, providing the earnings (retained or otherwise) are there to fund dividends.

As trusts, LITs distribute all net income in the year it is received along with any realised capital gains on a pre-tax basis and as such, it is the investor who is liable to pay tax. As a result, LIT’s pay no tax and therefore have higher cash earnings to be paid out. However, their income streams are more likely to be unpredictable, fluctuating with the manager’s investment activity. While LITs do have the ability to offset these fluctuations somewhat through returns of capital, there is still less control of this aspect compared to LICs, particularly year on year.

Zenith believes that the key determinant of the preferred structure for managers is the asset class, investment strategy and objective. For Australian equities managers, particularly those with high levels of portfolio turnover, a company structure is arguably more conducive to the generation of a stable dividend stream to shareholders. For asset classes where income generation at the security level is more predictable (e.g. fixed income), or where assets or strategies tend to generate less income (e.g. global equities), a trust structure may be more attractive.

Given the position of Australian equity LICs in generating stable dividend streams from an asset class with comparatively high volatility, Zenith believes it is logical that the company structure as a vehicle will continue to remain a core aspect of the listed investment market.

However, despite a Coalition victory, the issues around the cost of imputation to the government remains a moral hazard. Zenith believes that all investors, regardless of their current position on the road to retirement, must be cognisant of the consequences of political risk to their portfolios and ensure where possible that adequate planning for flexibility is undertaken.