Rate cuts - good for some fund managers, not for others

While the media’s obsession with the RBA’s actions has largely centred on mortgage rates and the property market, Zenith believes there are other implications for income orientated funds, particularly those with investment objectives linked to the RBA Cash Rate (Cash Rate).

In early 2018, Zenith started to observe some irregularities with respect to the relationship between the 90-day Bank Bill Swap Rate (BBSW) and the Cash Rate. Specifically, the BBSW began trading at a progressively wider spread (or premium) to the Cash Rate. On 21 June 2018, this spread peaked at 0.61%, a level not seen since January 2010.

While the existence of this spread premium is not new, the extended period over which it exceeded 0.30% was unique. As of March 2019, the investment term extended to 268 days, surpassing the previous record of 235 days (ending in August 2008). 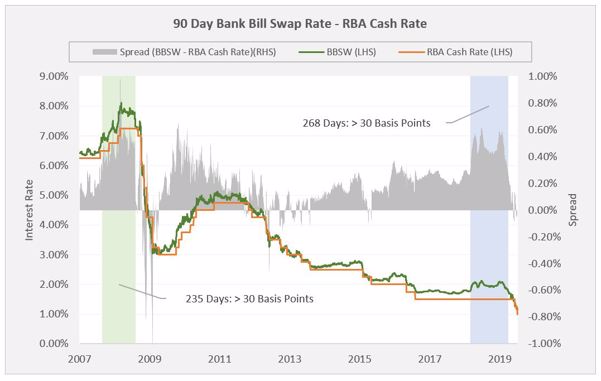 Also worth noting is that over the 12 months to March 2019, the average spread premium recorded was 0.41%, which exceeded historical averages, and was the third widest (following the periods ending May 1995 and July 2008) on record.

What does this all mean?

Across Zenith’s Approved Product List there are several income-focussed funds that target a return that exceeds the Cash Rate.

“Many of these strategies have exposure to floating rate securities that are priced at a margin above the BBSW,” explains Daniel Vinicombe, Investment Analyst at Zenith Investment Partners.

“However, with the RBA’s most recent rate cuts, this good run has come to an end,” said Vinicombe.

“Given the average spread over the 12 months ending March 2019 was 0.41%, a drop to zero is significant, particularly for those lower-risk strategies seeking to deliver a conservative margin above the Cash Rate."

“While this is a more challenging outlook for some strategies, history would suggest the spread will settle closer to 0.15% to 0.20%. If this happens, it’s less likely that the returns of the recent past will be replicated in the near-term.”