The impact of Coronavirus 2019 (COVID-19) has had significant ramifications on financial markets which has prompted unprecedented responses from central bankers and governments globally. Locally, the Reserve Bank of Australia (RBA) has embarked upon a program of unconventional monetary policy to provide liquidity, stabilise confidence, and address market dislocations. This has been supplemented by federal and state-based fiscal stimulus programs targeted at supporting employment, consumption and business investment.

We believe the combination of monetary and fiscal policy has helped to restore market confidence following the extreme moves in markets experienced in February and March. That said, these actions are not without consequence and we believe returns across the AFI asset class will be lower over the near to medium term. Notwithstanding this, the current environment remains conducive to active management, with opportunities to outperform.

Monetary Policy, Quantitative Easing (QE) and its impact on markets

The role of a central bank is to establish monetary policy, which is the process of adjusting interest rates for the purpose of achieving a broad set of macroeconomic goals. With respect to Australia, the RBA has a focus on promoting economic growth through a sustainable inflation rate (targeting 2% p.a. to 3% p.a. over the course of a market cycle) and full employment.

To achieve these objectives, the RBA actively adjusts the interest rate on overnight money market loans, with the goal of influencing the behaviours of borrowers and lenders. Traditionally, the RBA has intervened in markets and increased cash rates (i.e. a tightening bias) where the domestic economy has shown signs of overheating (i.e. growing too strongly), with the potential for inflation to rise above the top end of its targeted range. The reverse strategy would be implemented where the economy was slowing and showing signs of contraction.

However, with cash rates at an historical low of 0.25%, the effectiveness of conventional monetary policy has been reduced. Specifically, the RBA has limited flexibility to cut cash rates to stimulate consumption and business investment in response to market extremes.

Faced with this dilemma, the RBA has implemented more contemporary approaches to interest rate management, and following an emergency meeting on 18 March 2020, announced QE in response to COVID-19. Specifically, the RBA advised a targeted yield curve program where it would seek to anchor the yield on 3-year Australian Government Securities (AGS) around 0.25%. To achieve this objective, the RBA would purchase sovereign and semi-government bonds through secondary market transactions.

Since this announcement, the RBA has purchased more than A$51 billion of sovereign and state issued bonds and of varying maturities. Corresponding with these activities, the AGS curve has flattened significantly, demonstrated in the chart below. This has been most evident at the front end of the curve, with yields out to three years effectively anchored to the cash rate. 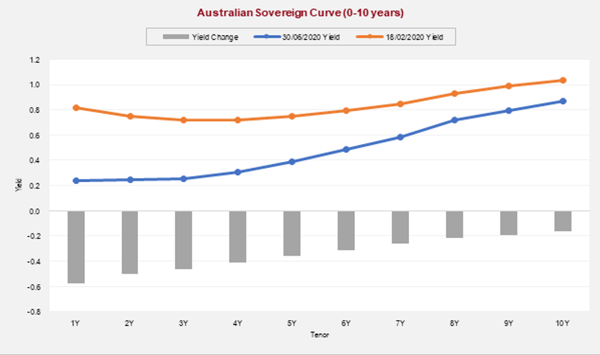 We consider such an outcome to be significant for two key reasons. Firstly, by placing a ceiling on the yield of 3-year AGS, this aids in the repricing of risky assets, most notably those financial instruments priced off the 3-year reference rate. Secondly, a flatter yield curve lowers funding costs and improves the environment for issuing bonds. Such conditions are expected to be particularly beneficial for federal and state governments who are expected to commence issuing significant volumes of bonds to fund their respective stimulus packages.

Stimulus packages and their potential to impact performance outcomes

In response to COVID-19, Australia’s federal and state governments have collectively announced over A$259 billion in expenditure programs, representing approximately 13% of Gross Domestic Product (GDP). The size of these stimulus packages is significant and at a federal level has only been surpassed by Singapore. Importantly, these fiscal programs are expected to translate into a national deficit, the size of which has not been seen since immediately post World War II.

Given the size of these fiscal relief packages, we anticipate change in the composition and ultimately performance of the Bloomberg AusBond Composite Bond Index (0+ Years), a commonly referenced benchmark for the purposes of measuring the performance of AFI strategies. Specifically, we believe the government component of the benchmark will rise in percentage terms, resulting in a lengthening of duration, a potential decline in income levels and ultimately a more subdued return profile over the near to medium term.

The chart below illustrates the growth in the government component of the benchmark through time and the corresponding increase in duration. 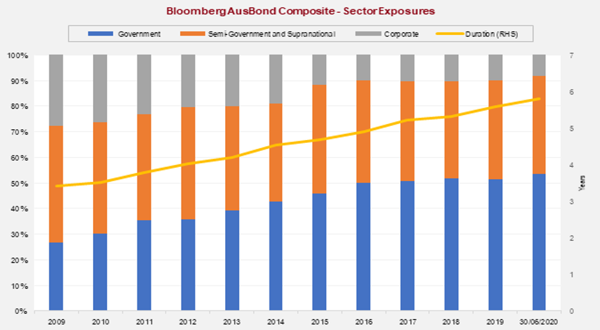 In recent years, returns across the AFI sector have strongly benefitted from a structural decline in interest rates. Notwithstanding these favourable tailwinds, AFI managers have found it difficult to outperform, with many failing to anticipate the extent to which the RBA would cut interest rates to support the economy. This has been particularly evident across our AFI – Bond category with managers commonly retaining a short-duration bias (i.e. they expected interest rates would rise), which has detracted from performance.

However, in an environment where the RBA maintains a targeted yield curve program, and cash rates approach zero, benchmark returns are less likely to be influenced by the direction of interest rates. Notwithstanding this, we believe active managers are well positioned to outperform, with opportunities likely to present in the following areas:

In our opinion, managers with a demonstrated track record across one or more of the above areas are best positioned to navigate the current and largely unchartered market terrain. Importantly, we believe investor outcomes will be heavily influenced by manager selection and the blending of complementary strategies. Regarding the former, this is likely to be particularly pertinent given the heterogeneous nature of the AFI asset class and growth in strategies on offer.

Across Zenith’s Approved Product List, we rate several high quality and conviction based fixed interest funds that exhibit these characteristics. Further information on these funds, can be sourced from our subscriber-based website.