Although only at the midpoint, 2020 is surely going to be remembered by many as the year they’d rather forget.

Although there’s rarely a dull moment in markets, the first quarter of 2020 certainly proved this with a vengeance as the impacts of the COVID-19 pandemic began to take hold.

The first quarter of 2020 really was a tale of two halves. Up to mid-February, share markets were roaring along, continuing their strong run of 2019. From that point on, markets began falling rapidly as Coronavirus fears took hold.

Overall, as can be seen in the graph below, almost all asset classes ended the quarter heavily down. While shares were impacted across styles, sectors, and regions, the standout performers, were government bonds. However, while they returned positively over the quarter, it was not a smooth ride.

After what had been such a strong run, a market pullback should not have been unexpected. However, what surprised many, including us, was the speed and ferocity of the selloff. At the depths, major share markets around the world had fallen as far as they had during the global financial crisis but had taken weeks, not months, to lose the same percentage.

Despite the sell-off in March, April witnessed an equally stunning reversal. As often is the case, just when all seemed lost, markets rebounded strongly as the selling abated. What was sold off the most in March, recovered the most in April, with Australian small and microcap shares among these.

Fixed Income
In late March, fixed interest markets experienced some issues with liquidity all but effectively disappearing. This showed up as hugely increased transaction costs. As can be seen in table below, the cost to trade Australian fixed income securities during March was outsized compared to normal times.

These liquidity conditions and widening credit spreads created a perfect storm for fixed income managers, with even the most conservatively positioned producing negative returns.

AREITs
Another notable development was the underperformance of Real Estate Investment Trusts (REITs) and AREITS in particular.

While parallels have been drawn between recent performance and that during the GFC, the drivers of underperformance are very different.

During the GFC, the problem was too much debt, whereas in the recent sell-off it was demand destruction as social distancing and lockdowns impacted foot traffic and potential rental income.

While there will undoubtedly be fallout in a post-COVID world, much has already been priced into these shares with the underlying REITs and managers showing the ability to reposition their asset mixes and portfolios to adjust to changing environments.

Value versus Growth
In times of market volatility, we would expect the value style of investing to ourperform the growth style. During this recent downturn, this has not been the case.

Much of the underperformance can be attributed to the fact that many of the value stocks fall within more economically sensitive sectors such as energy and consumer discretionary. These were among the hardest hit, given the uncertainty around the earnings profiles of these companies. April saw a reversal of this trend, with many of these stocks rebounding strongly. 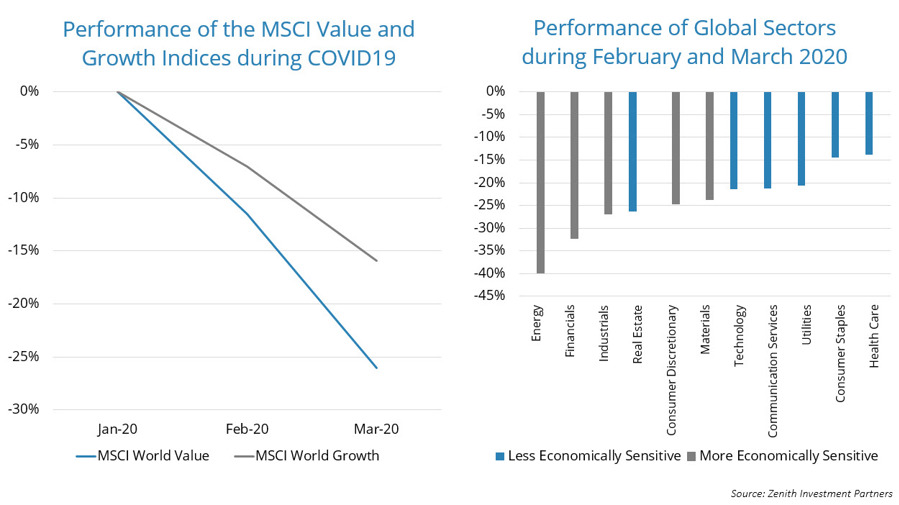 There are opportunities aplenty: While no-enjoys seeing share prices fall, the abrupt nature of the sell-off and significant market dislocations should create a good environment for active management, as has been the case during previous sell-offs.

In the absence of a crystal ball, remember to stay the course: Despite the chorus of experts who think they can predict the future, the key to successful investing isn’t trying to predict the future. Rather the key is staying focused on the long-term and remaining disciplined. It can be tempting to time markets but history has shown time and again that it’s almost impossible to do this successfully and most importantly repeatedly.

By Steven Tang, Head of Consulting