The COVID-19 economic revival has recently encountered inflation concerns as increasing interest rates threaten the economic recovery. The bond market volatility has seen the Australian 10-year Government bond yield briefly surge to 1.91% in February 2021 from a March 2020 low of 0.61%. As such, Australian bonds now offer investors some of the highest yielding government securities in the developed world.

Our domestic central bank, the RBA, has responded by increasing asset purchases under its quantitative easing programme, and likewise, responded through its more targeted yield curve control in attempts to maintain lower bond yields.

Higher bond yields translate to higher interest rates, which is problematic for the economic outlook at this point. This is due to the stimulatory effect that low interest rates impart through reducing borrowing costs for individuals, governments and businesses which encourages investment and spending. Furthermore, lower bond yields depreciate the domestic currency which improves the price competitiveness of exports. 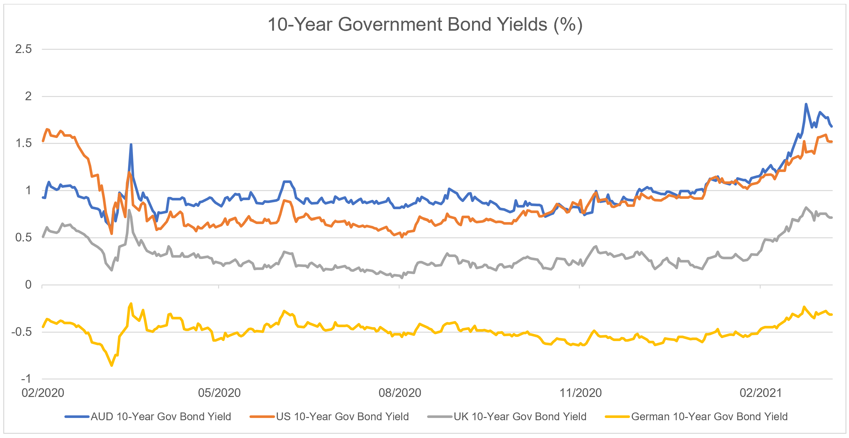 On the international stage, the recent passage of President Biden’s US$1.9T fiscal package has turbocharged growth expectations which is a positive for economic prosperity – provided the accompanying rise in bond yields is orderly. The domestic economic outlook is similarly rosy, with Australia’s relatively successful management of COVID-19, generous fiscal support and the vaccine rollout forecast to usher in an era of strong growth.

The strength of the moves in bond yields implies that the market believes interest rate increases will accelerate in light of the improved economic backdrop compared with a year ago. And although the formal communications provided by central banks suggest rates will remain on hold for the foreseeable future, the market positioning strongly contradicts these statements.

In particular, the RBA has stated that the overnight cash rate will likely remain on hold at 0.10% until 2024 and the 3-year bond yield will also remain anchored at 0.10%. However, given the dislocations observed in fixed income markets, the resolve of central banks to stick to these formal timelines is being called into question.

No one is thinking about raising rates…

To restore market composure, policy makers have been quick to address concerns around inflationary forces taking hold. Importantly, guidance from the RBA and the US Federal Reserve suggests that any inflation spike will ultimately be transitory once the base effects from the deflationary period associated with global lockdowns and negative oil prices rolls off.

Moreover, tepid wage growth presents a challenge for central banks to achieve their inflation targets in the near-term, with ongoing labour market weakness inconsistent with a sustained period of inflation.  Remember that wage growth was persistently sluggish pre-COVID with an unemployment rate of approximately 5%. And with unemployment sitting at 5.8% as at February 2021, the anticipated wage growth pressures will likely be muted for some time.

Further arguments against a sustained inflation outbreak centre on a significant debt overhang from this crisis and the GFC, an ageing global population, and the disinflationary forces associated with ongoing technological enhancements and automation.

Bull markets are born on pessimism, yet grow on scepticism

These conflicting dynamics reinforce the need for active investment management, as elevated market volatility is likely to be an enduring feature of the ‘new normal’. Already it seems as though central bankers have partly assuaged the market’s fears through more assertive intervention in fixed income markets to restore normal functioning.

Investors have similarly rushed head-on back into the market as the ‘buy the dip’ mentality takes hold once again. However, it’s important to recognise that an unanticipated and sustained inflation surge remains one of the headline long-term risks facing markets.

This is attributable to the complex relationship shared between equities and bond yields. Equities are frequently valued on the discounted sum of their future cash flows, which is based on the prevailing bond yield. Consequently, a higher bond yield means future cash flows are assigned a lower value and hence the stock is worth less. This is particularly troubling for a company like Tesla, where the valuation is relying on lofty cash flow assumptions in the distant future.

Dancing with the central bankers

Given this ongoing tug of war between inflationary pressures and the resolve of central banks to resist blinking until full employment translates into wage growth, selective capital allocation remains crucial. We continue to advocate for quality active management to navigate this unchartered terrain. Encouragingly, we’re pleased to report strong outperformance for the 2021 calendar year to date for our fixed income portfolio managers.

Given we consistently emphasise drawdown protection and risk-mitigation, we’ve intentionally structured our portfolios to exhibit lower interest rate duration than the benchmark. This has meant that our portfolios are less susceptible to the rising bond yields and associated capital losses observed in this environment.

The bulls remain in control

Although the volatility in markets can be unnerving for investors, market dislocations present attractive investment opportunities for active managers. However, with bond yields rising, the risks associated with investing in market leaders regardless of valuations is growing, and again, reinforces the need for professional management.

Notwithstanding this uncertainty, we recognise that myriad investment opportunities remain in the marketplace, yet disciplined, active management will become increasingly important as the risks of a deeper correction remain. As such, risk management remains key when navigating the financial markets boogey man: inflation.