Russia, Ukraine and the importance of active management

In February 2022, the world was rocked by Russian president Vladimir Putin’s announcement of a ‘special military operation’ in Ukraine.

The materiality of an event can often be gauged by its immediate impact on markets, with Putin’s announcement causing an incredibly sharp negative reaction, particularly within Russia. The chart below displays the performance of Russian equities and emerging markets more broadly (as represented by the MOEX Russia Index and the MSCI Emerging Markets Index, respectively) over the month of February 2022. 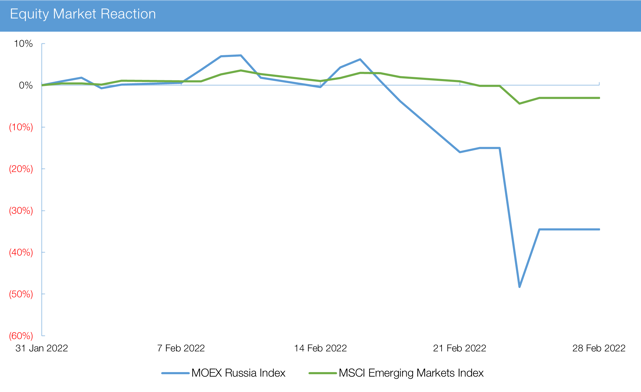 We can see the violent negative reaction to the news on Russian equities, with the Russian market falling approximately 40% on the day of Putin’s announcement. Fortunately for many investors, the further emergence of China, Taiwan and India over the past decade, in combination with the fallout from Russian economic sanctions and recession, has caused Russia’s weight in the MSCI Emerging Markets Index to decline from approximately 10% in 2008 to just 4% at the start of 2022.

Unfortunately, there’s been no resolution to the crisis to date, with well-publicised sanctions placed on Russia since the beginning of the crisis from major global powers and trading partners. Parallels can be drawn in the investment world, with MSCI announcing at the beginning of March that Russia would be removed from the MSCI Emerging Markets Index. In addition, the chart below highlights the ‘sanctions’ that have been implemented by our rated emerging market managers. 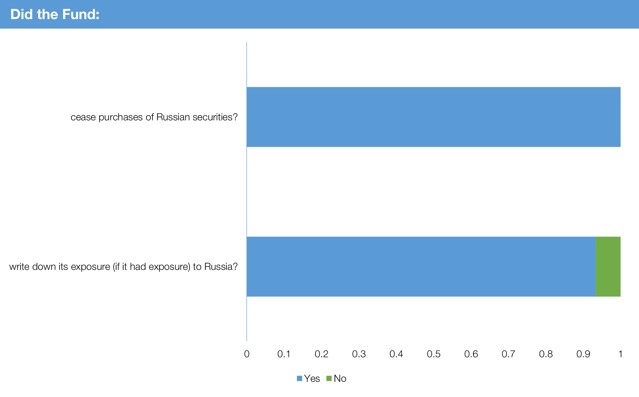 Although time will tell whether our active managers invest in Russia again, the sweeping exclusions implemented by these managers illustrate the gravity of the situation and its implications for the investment world.

How were our active managers positioned during the start of the crisis?

In a recent survey, we found that 18% of managers never held exposures to Russia. Of those that held positions in Russia, 79% reduced their exposures between 31 December 2021 and the beginning of the ‘special military operation’ in February 2022 and subsequent market decline. In addition, over the same timeframe, those that reduced exposures had done so by an average of 42%.

While performance related to holding Russian companies/companies with Russian revenue exposure is difficult to isolate, we’re pleased that most managers materially reduced their exposures prior to the crisis.